skip to main | skip to sidebar

Soundscapes and Analog Feedback: A Beacon of Hope?


The concept is this:
"Mankind has been nearly erased - the few who remain suffer on a dying planet. In a last ditch effort to seek help, one person is chosen to represent the human race in a series of analog broadcasts sent into deep space - a beacon of sound and vision. But, as the the calls go unanswered, we witness glimpses of the hopeless broadcasts through glitches in our remaining analog receivers."


Obsessive Compulsive Cosmetics was generous (or crazy) enough to let me run with this idea as the foundation for their new “LO-FI” ad campaign. The product line will be available in Spring of 2011. (If you don't know OCC, you should check them out. They are a young, edgy company that deals specifically in very high quality, 100% vegan and cruelty-free cosmetics. Products that work, beautifully.) It was important to OCC that the images created be “anti hi-def” in nature to compliment the analog themes of their new product line: Lip Tars and Eye Shades with names like “Interlace” and “Beta”. But, rather than jumping backwards to a retro look, we decided to look towards the future. Albeit, a bleak one.
We were graced with the talented and lovely Jamie Clayton as our model. (What better way to represent the future!) Locked in a Brooklyn apartment with old video recorders, a CRT television and countless analog pedals, receivers and amplifiers, we set out to create some art.... 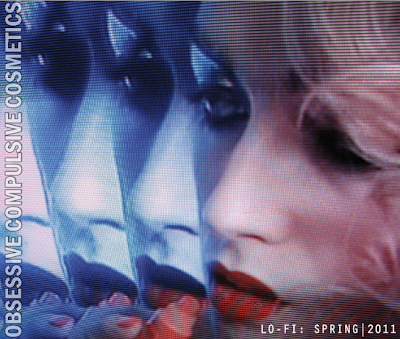 Let's geek-out for a moment: There is absolutely NO airbrushing or post effects used in creating this image. Instead, I used an early early model DV camera (one with two buttons: ON and RECORD) and had Jamie do her thing in front of an old CRT monitor. I then pumped the image from the camera back into the tv, creating “analog feedback.” (The only lighting was a 500W Daylight bulb in a small china-ball, and the backlight from the tv itself.) The resulting echo looked great, but it wasn't Lo-Fi enough for us (“us” being: myself and OCC partner Katie Pellegrino – who also did the tremendous makeup work). So, I imported the footage into my laptop, then fed it back into the television, where I then re-recorded it on the old DV camera. From there, I replayed the footage back onto the tv, where we then took hundreds of stills of the moving images – off of the tv screen. Thats what you see above.


The next day, I took the video footage and began editing what would become three “transmissions” from our dystopian ambassador. 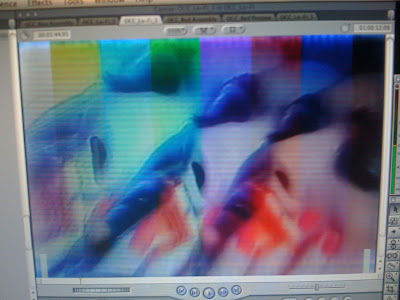 Let's trip-out for a moment: The genesis of this idea stemmed from these intense radio emissions from Saturn captured by NASA's Cassini spacecraft. I have been listening to these recordings on a loop for over a year now, and have been itching to work them into a project. In me, they have inspired numerous daydreams involving lost races of intelligent beings or warning signals from an alternate multiverse... The OCC campaign provided me with the perfect outlet for such musings, so I used excerpts of the Cassini recordings in the soundscapes I created for the LO-FI Transmissions. What was decided on was this: The “glimpses of the hopeless broadcasts...” would be framed as three random broadcast interceptions at different points in time – and as each progressed, they would get more and more desperate. These broadcasts would represent a timeline for the last gasp of air for planet Earth. But, this last gasp needed breadth. Something more than just the Cassini tapes.

On the day of the shoot, I recorded Jamie reading some pre-selected text. I then went home and pumped the audio through a series of guitar pedals and finally out through my little Peavey amplifier, where I re-recorded her (now totally distorted) speech. I then recorded some tweaked out E-Bow notes on my '67 Telecaster. When I finally compiled all the audio I wanted, I imported everything into Final Cut Pro and began editing.


I edited all the audio first, giving myself a time limit of only 20 seconds for each broadcast, and built a unique soundscape for each. Most of the effects present in the final versions were done through the guitar pedals. 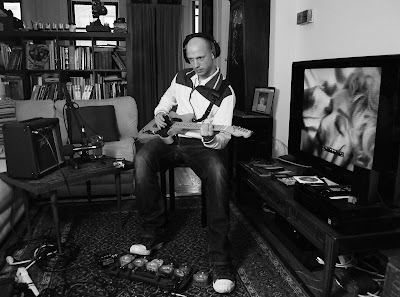 Once the soundscapes were complete, it was time to start having some fun with the video...

Posted by Evan Meszaros at 7:31 AM

stay in the loop